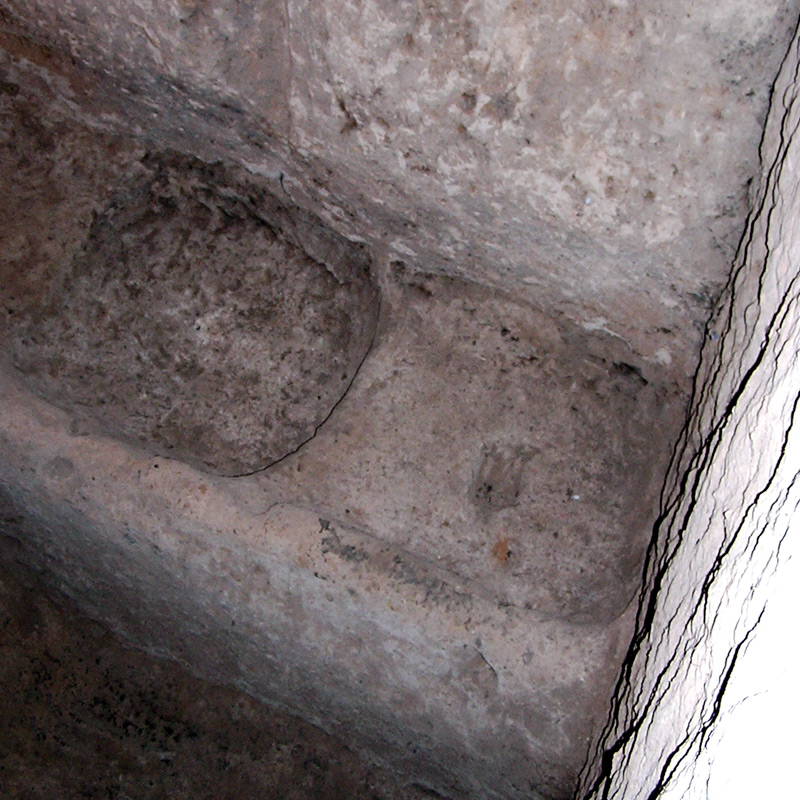 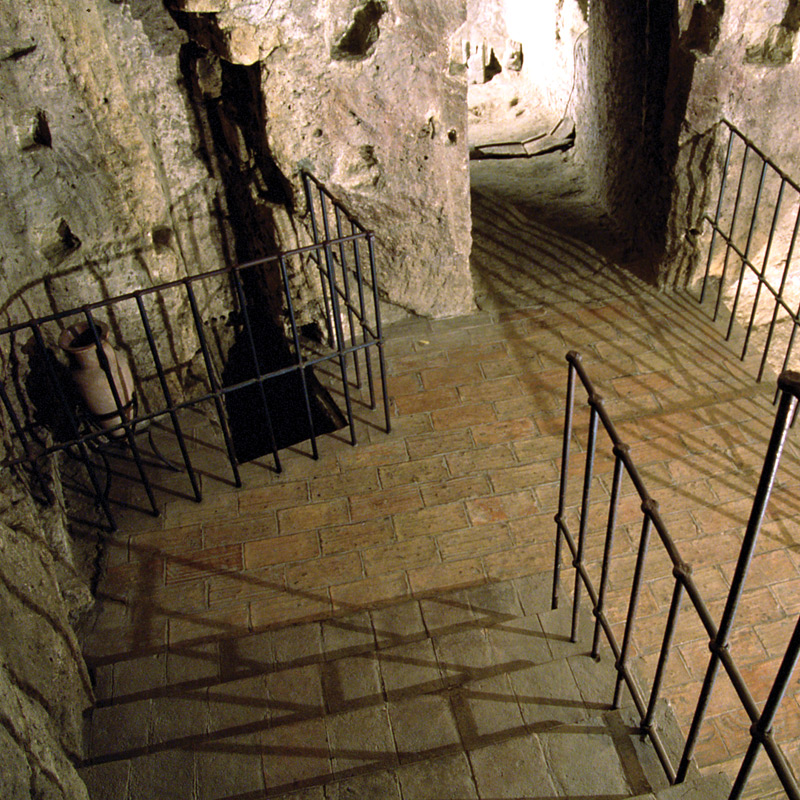 From tomb to clay warehouse

Just like most of Orvieto’s caves, the space below the first underground room was continuously modified over the course of the centuries.
In fact, the excavation has the typical shape of an Etruscan tomb-bed, the place where the body of the deceased was laid to rest. When the central pit and those on the side were found, they were thought to have turned into vats, at the start of the medieval period, and were for fulling*.
One thing is sure, in the centuries that followed they became used as clay deposit for the furnaces above, which was evidenced by the thick clay deposits found during their excavation.

* Fulling is a process used in making textiles. it involves mechanically pounding the cloth to make it softer and more compact. 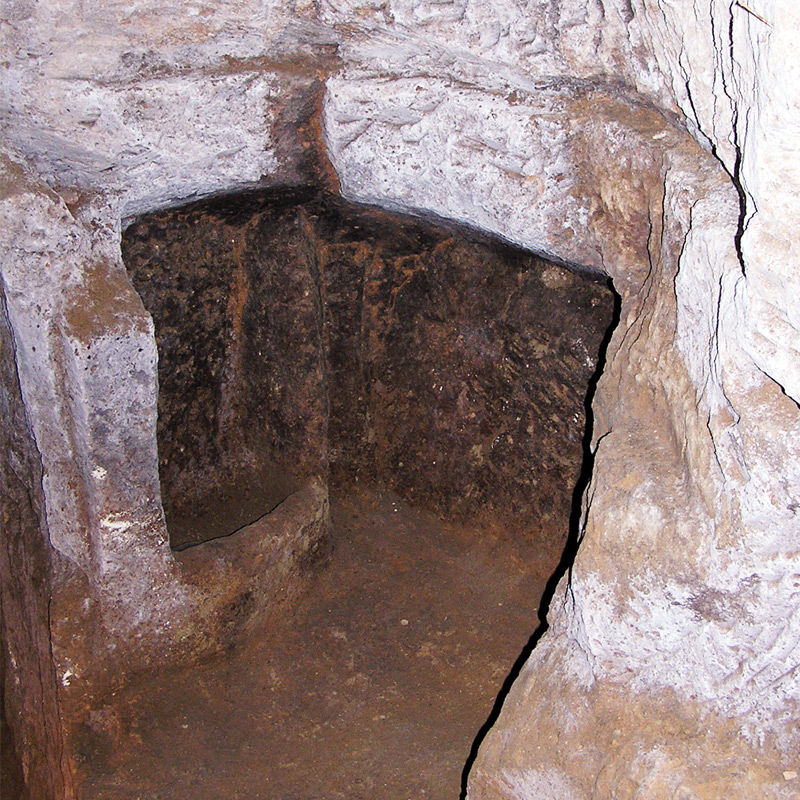 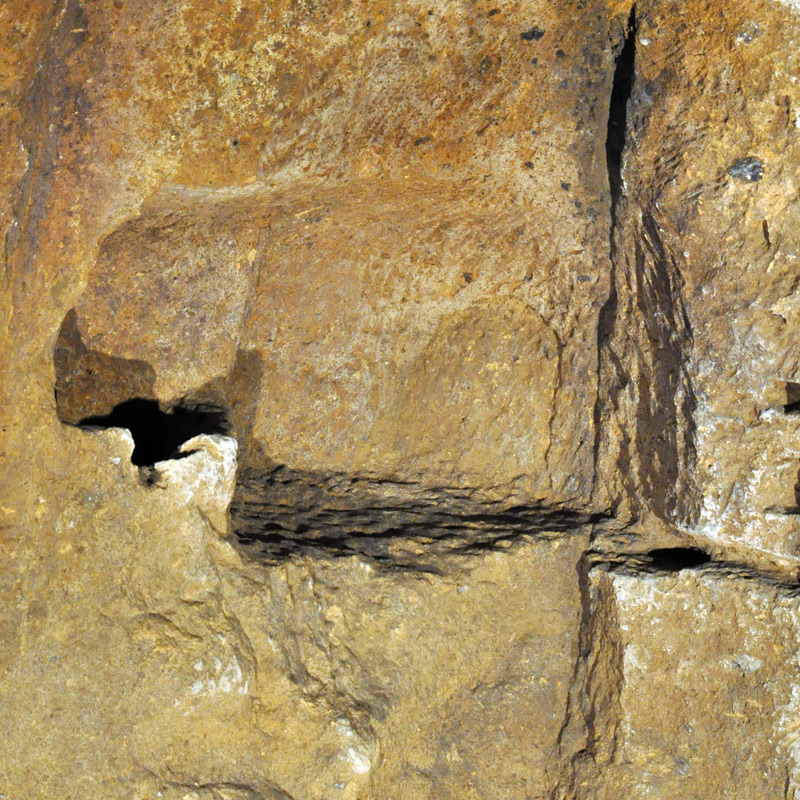 The traces of the rock tombs

The last two caves, uncovered in 2002, show an endless series of re-uses and transformations and make it challenging to interpret either their original use or their subsequent modifications. The presence of two niches with a lateral basin, one in this area and one in the next, suggest that they may be the remains of a rocky necropolis. Two practically identical structures have been found in the oldest tombs in Norchia, in Lazio, and there are other similarities with these grottos too, such as the horizontal furrows along the walls and a multitude of holes passing through the tuff. What is exceptional about this discovery is that, up until a few years ago, tombs dating back to the original Etruscan occupation of Orvieto had never been found. 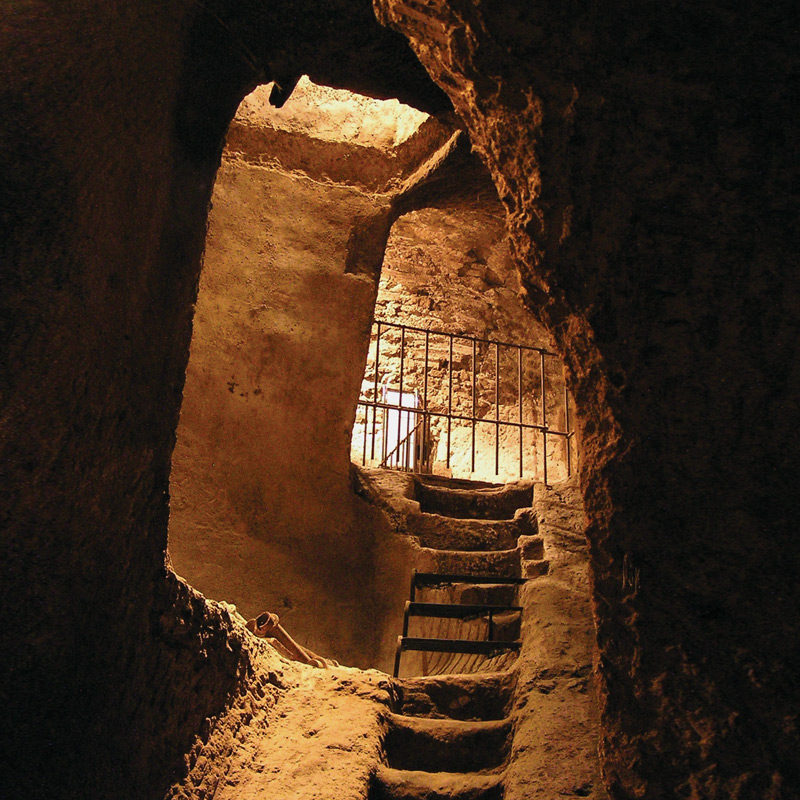 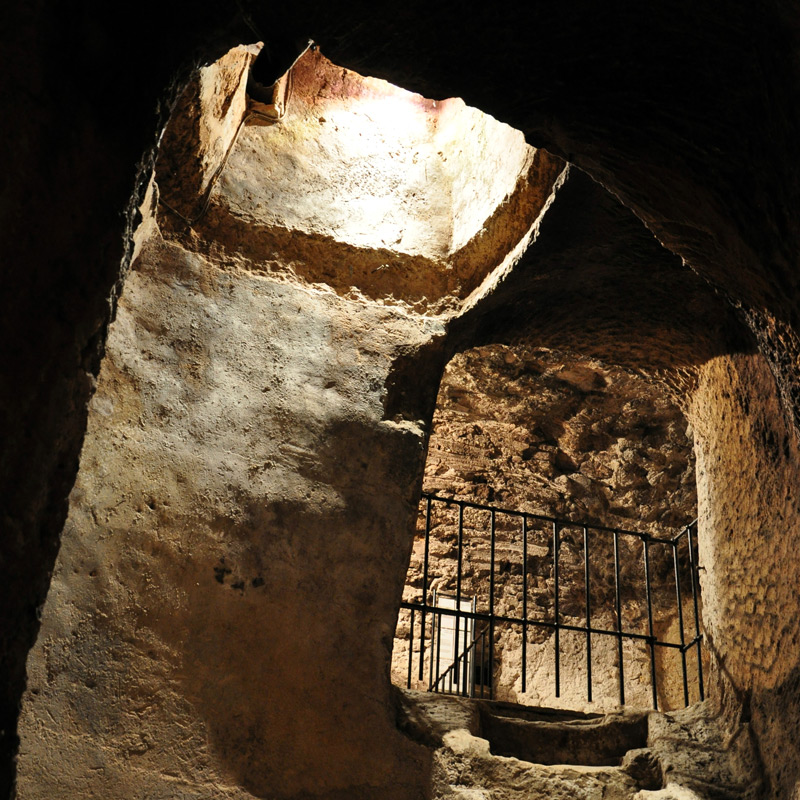 The Etruscan cistern with “cocciopesto” plaster

From the fifth cave a cistern can be seen which was used to collect rainwater.
This large reservoir is Etruscan, (5th – 6th century BC). The cistern was rendered water-tight using lime and finely crushed or broken terracotta, a technique known today as “cocciopesto”. Rainwater running off the roofs was channelled through ceramic pipes like those on display at the bottom of the cistern. Before reaching the cistern, it passed through a layer of material that filtered the rainwater.
To improve the quality of the rainwater in the cisterns eels were often raised there.
In addition to keeping the water moving, they ate mosquito larvae.
Due to the lack of light, the eels became blind and white but were an excellent source of protein. 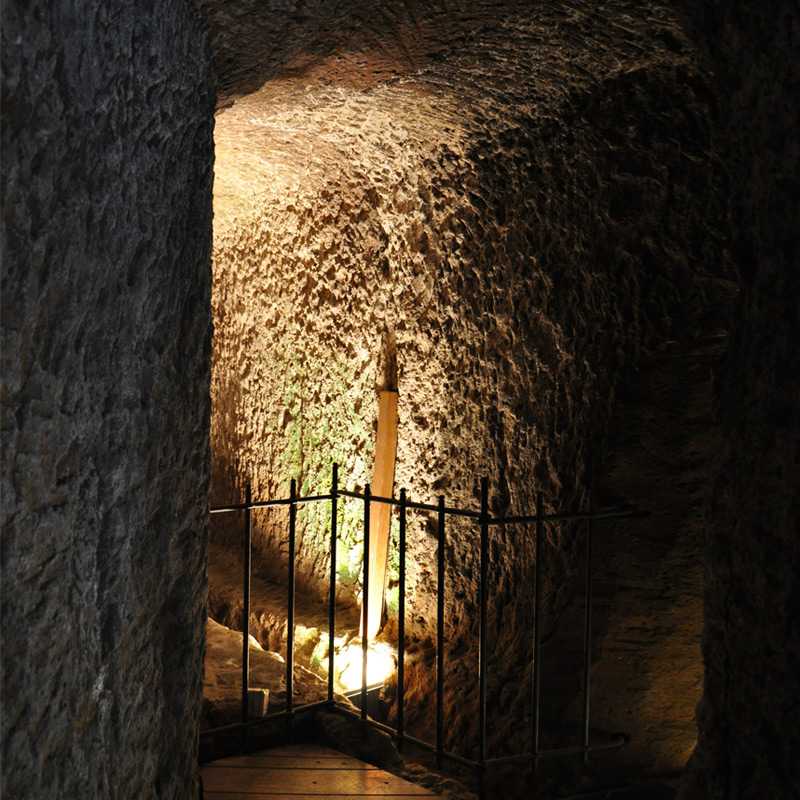 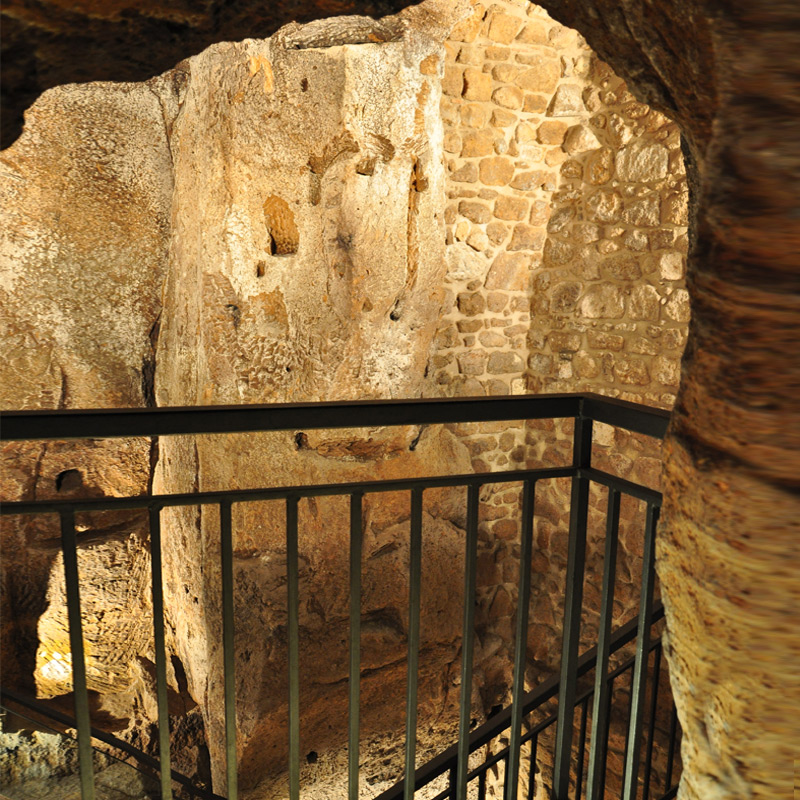 The Etruscan tunnels for water

The subsoil of Orvieto is furrowed by a dense network of Etruscan tunnels to collect water from infiltrations. It’s possible to see one from the last cave: originally connecting to the basement of Palazzo Filippeschi, it has the same structure and orientation as the one at the bottom of the Pozzo della Cava.
The small furrow visible in the floor was used to carry water to collection points.
What is unique about this excavation is that the canal descends along the tuff wall, instead of towards the centre of a cistern, which is more usual in similar Etruscan structures. 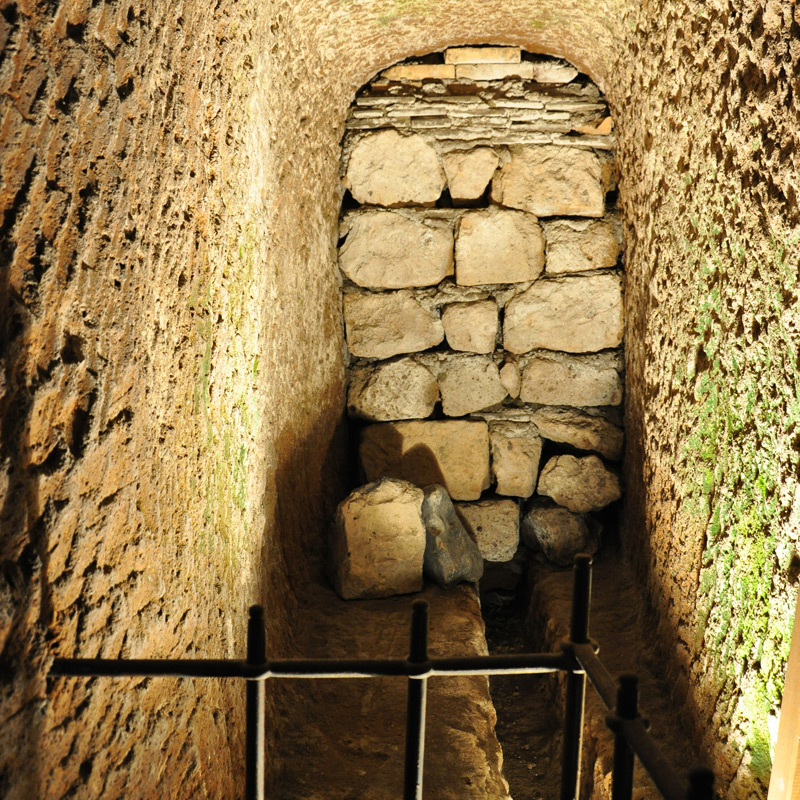